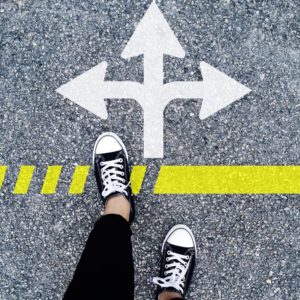 Choices can take you many places in life.  You don’t always have to know the end destination, just be confident that your choices could lead you down the path less followed.

When asked what I wanted to be when I grew up my answers consisted of a farmer (so I’m told) and a lawyer, but never someone who wore steel toed shoes, safety glasses, hearing protection and all of the other personal protective equipment (PPE) typically required to work in a manufacturing plant.  However, this is where my career choices lead me and here’s how it started.

It didn’t take many choices to get me into the manufacturing world.  It started at Western Michigan University with the process of looking at all of the major choices in the business college with the career counselor.  For me this was not a difficult process, but one of necessity.  I knew what I did not excel at, but at that point I did not know my strengths.  So, we started with the process of elimination where I physically crossed out every major on a piece of paper that I knew I wouldn’t join.  It didn’t leave many and I will admit I started to panic.  However, there was a new major called Integrated Supply Matrix Management (aka Supply Chain Management) that was placing students into careers at a high rate, for women even higher.  Since this was occurring around the same time that the country was recovering from 9/11, security of a position at a company to pay off those student loans, was a major selling factor for me.  And, since I knew nothing about it, so how could I know if I wouldn’t be good at it?!

So, the choice was made and on I went getting a great education and receiving an internship at an automotive company that gave me my introduction to that personal protective equipment I never imagined.  It was a major culture shock having to wear a uniform and working in an open office (no cubicles at all), traveling to suppliers and have them look at me like I was an alien with two heads.  This industry was still made up of mostly men, especially at higher positions, so they were a little surprised to see a young woman entering their factories and asking questions.  Although this was my first time experiencing these questioning looks, unfortunately they would continue throughout my career.  I had yet another choice to make on how to handle these situations, but it wasn’t quite time for me work through that.

I ended up graduating with honors and discovered I was actually pretty good at it!  At the end of my senior year came the recruiting fairs, and my next major life choice.  I purchased my first professional suit and started the meet and greet and interview process, also a first.  I ended up interviewing with a large industrial manufacturing company that was starting their Supply Chain Trainee program, and they asked me to join.  I was incredibly excited, but also terrified.  The position would require rotating through the disciplines of the supply chain in different locations across the country, which were unknown up front.  This was a big choice, but in my gut I knew it was the right one, and a great opportunity.

I accepted the offer and moved from home into my first apartment, alone.  Now, although I had made some good choices so far (at least I thought so!), my choice in apartment location was not one of them.  After the lease was signed I learned that some less than savory things had occurred at the complex in the past.  Obviously I survived, but I learned a lesson that sometimes more research is required before making a choice!

I would venture on to make many more choices that would lead me through many parts of the manufacturing world.  Some more risky than others, but I will always be thankful for listening to my gut even when fear could have easily taken over.  Now I get to wear all of that PPE proudly!